Expected Threat (or xT) is one of the coolest ideas to come up in the football analytics sphere in the last few years. Originally introduced by Karun Singh in this post, it is essentially a ball progression model. That is, it provides us with a framework to value any ball moving action in terms of how likely it is to result in a goal in the next n actions (where a good n value is typically 4-5).

Karun has made his xT data available here and there already exists a python implementation of xT here. So why implement it again? My main motivation to do this is to not only show the code but also explain it a little; try to get into the inner workings of xT and hopefully go over the entire process of converting a raw event data stream to a finished model together.

Installing libraries in Julia is fairly simple using the Pkg library. For example, to install the library Plots, just run the following command at the Julia console:

The dataset we’re going to use is the entire last season of Premier League (2019/20). The data is already converted to the SPADL format. If that’s a new word to you, SPADL is just an attempt to standardize all the different data providers like Wyscout, Statsbomb, Opta, Instat to a single format. I’m personally a big fan as it makes it much easier to work with event data since your work becomes transferable across different data providers (for more details, go here). The CSV file is here. If you’re following along with the code, download it and place it in the same folder as your notebook.

The final equation as well as the intuition behind it is very well described by Karun in his post. To quote the relevant parts:

Let $V_{x,y}$ be the “value” that our algorithm assigns to zone $(x,y)$. Now imagine you have the ball at your feet in zone $(x,y)$. You have two choices: shoot, or move the ball. Based on past data, we know that whenever you shoot from here, you will score with probability $g_{x, y}$. Thus, if you shoot, your expected pay-off is $g_{x,y}$.

Or, you can opt to move the ball via a pass to a teammate or by dribbling it yourself. But there’s another choice to make here: which of the 192 zones should you move it to? Say you choose to move the ball to some new zone, $(z, w)$. In this case, your expected pay-off is the value at zone,$(z, w)$, i.e. $V_{z, w}$. But this was just one of the 192 choices that you had; how can we compute the expected pay-off for all of the 192 choices in totality? Here’s where the move transition matrix $T_{x,y}$ comes in: based on past data, we know where you’re likely to move the ball to whenever you’re in zone $(x, y)$, so we can proportionally weight the pay-offs from each of the 192 zones. Specifically, for each zone $(z, w)$, the pay-off is $T_{(x,y)\rightarrow(z,w)} \times V_{z,w}$, i.e. the probability of moving to that zone times the reward from that zone. To get the total expected pay-off for moving the ball, we must sum this quantity over all possible zones:

[Note: In the original post, Karun has divided the pitch into 16x12 grids. For this post, we’ll use the same dimensions]

There’s another bit that we need to worry about. The problem statement inherently produces a cyclic dependency since calculating the value at a zone assumes that we already know the values at other zones. The solution to this is to perform the xT calculation iteratively. Luckily, this is what for loops exist for and for our purposes, we can simple put the entire thing in a loop. And how many iterations do we run it for? Karun himself has suggested 4-5 iterations for sufficient convergence in his original post, but we can set a threshold and check against our own dataset.

To summarize, all that we need from our data wrangling session is the four inputs for our xT function:

The first three are all very similar. They all have the same shape (width times length) and are essentially just counts of certain actions divided by total actions in the cell. To make sure we’re on the same page, here’s how you might expect the shooting_probability_matrix to look like: 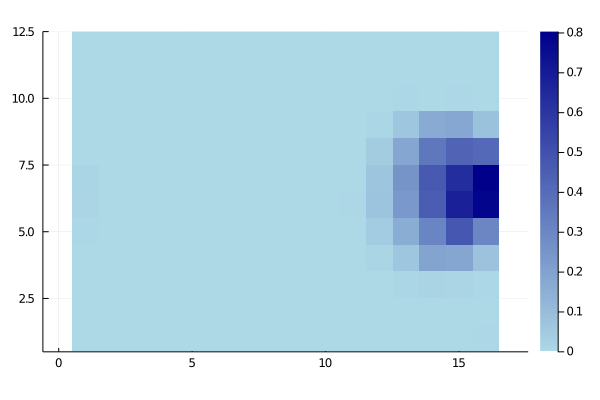 And defining our field length and width parameters

Next, let’s read in our dataset.

If you run head(df), you’ll see the following output:

To create our matrices in python, I would’ve used a simple groupby function to bin the (x,y) locations of our data. In Julia, we can get the same result with these two custom functions.

To our get_bins function, we provide a vector of values, an integer n_bins, and a max_lim(depending on the x or y axis) and it returns the resulting bin for each value.

The get_matrix function gives us the (12x16) matrix of counts for all the actions in the dataframe that we pass to it.

We first call get_matrix on all actions which are shots. Then we call it on all shots which are successful i.e., all goals. A simple Hadamard division of those two give us the average scoring probability matrix - score_matrix - in each of our 192 bins.

The move_matrix returns to us the count of all move actions from our grids. We sum it with our shot_matrix to get our total_matrix.

[Note: We’re working under the assumption that from any grid, the only options you have are to move the ball or shoot the ball. That is, the $P_m + P_s = 1$.]

After that, we divide both our move_matrix and the shot_matrix from the total_matrix to get our probability values.

At the end of all that, we finally have our move_matrix, shot_matrix, and score_matrix. We could try plotting them to see if the values look sensible. 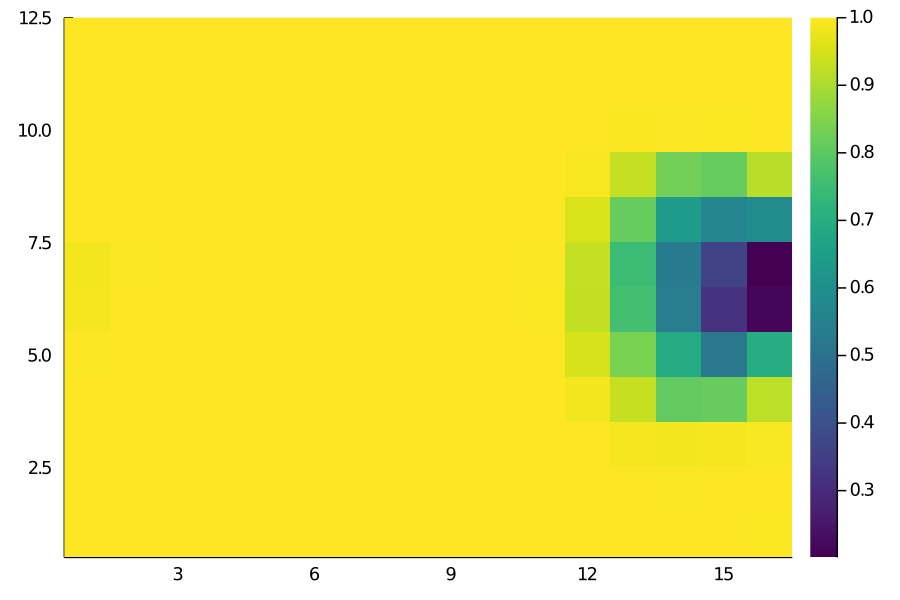 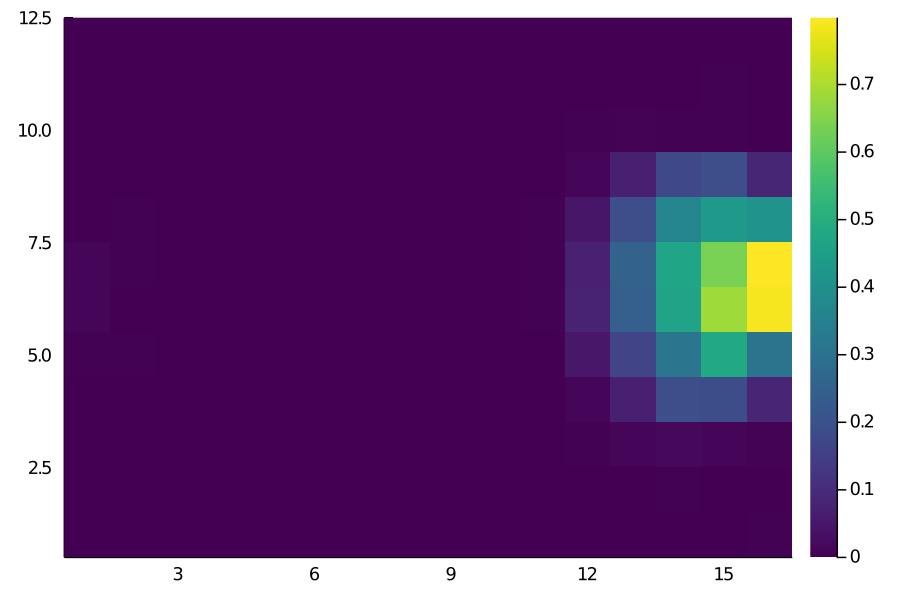 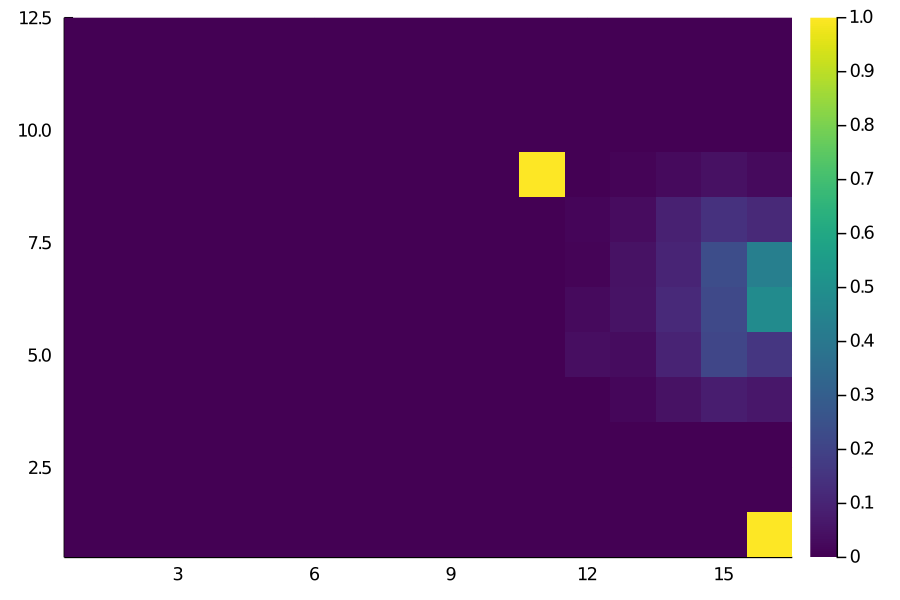 The results look more or less as we’d expect. For instance, the probability of moving the ball is pretty much close to 1 everywhere deeper but decreases as we get closer to the opposition goal.

(In case anyone’s wondering, the single yellow grid in the Score Matrix is actually this goal by Scott McTominay from last season’s derby win against Manchester City.)

The transition matrix contains a single value representing the probability of how likely it is to successfully move from a given grid to all of the other 191 grid zones. It is kind of like a lookup table for all possible combinations of move possibilities.

Now we finally have our four input matrices. Calculating the xT is mostly just a bunch of matrix manipulation steps.

We can now call this function on our inputs and it should return the 12x16 matrix of xT values. We could try to plot it to check if it looks anything similar to what you’d expect. 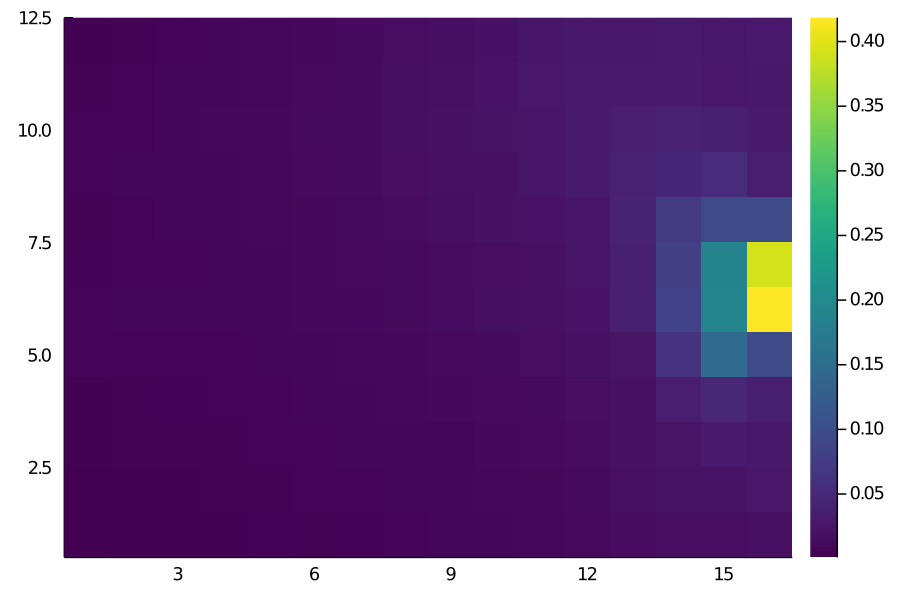 The values looks pretty accurate to me - for example, the grids closest to the goal have a xT value of roughly 0.4 i.e., there’s a 40% chance of goal within the next few moves. One clearly visible issue with this is the left/right imbalance. That’s really due to our dataset - some players are affecting the calculations more than average. It might be a good idea to manually make it symmetrical along the length axis. Nonetheless, it looks like a close enough estimate that I can call this implementation a success.

Hopefully, this post was useful in shedding some light into the inner mechanics of xT. We’ve not talked about the speed gains that Julia provides over Python and with reason; It isn’t really relevant as you’d not be running the derivation every time you use xT. But just to mention it: with proper typing and some more optimization, the expected_threat function runs roughly 30 times faster than the same thing in Python (using good old numpy).

There are caveats, obviously. I’m almost certain there are ways to vectorize the 4 X nested for-loops. I’m also certain that using something like PyTorch or JIT for the tensor manipulations is going to speed it up even further such that we get comparable speeds to Julia.

All of the code to reproduce the results are in this notebook here. Huge thanks to Karun for the inspiration for this and for explaining things so well in his original blog post. Also huge credit to the open-source xT implementation by the KU-Leuven people; a lot of my code is a straight-up copy of their python stuff.

For any kind of feedback(suggestions/questions) about this post or the code, feel free to reach out to me on Twitter or drop me a mail(the former is always faster).