Valuing Actions by Estimating Probabilities (or, VAEP) is one of the recent works done to value on-ball actions based on how likely they’re to affect the scoreline in the near future. That is, what’s the probability of an action to result in a scoring opportunity or a conceding opportunity in the next $n$ actions ($n$=10, typically). While an official implementation for the full model already exists, in this post we’ll implement another variant of the model - one based on Generalized Additive Models

Take the above play for example where we can see that Brighton make a mistake in playing out from the back and end up conceding a goal. Davy Pröpper gives away the ball in Brighton’s own third due to some great pressing from Naby Keita. Keita then proceeds to set up Mo Salah with a square pass for a relatively simple first-time finish.

Ideally, the framework we have in mind should punish the horrible turnover by Pröpper, and reward the ball regain and subsequent pass by Keita and the shot taken by Salah. The first action is important, because this is (one of the ways) how VAEP is different from xT - it not only rewards “good” actions on the ball, it also punishes “bad” actions (like being dispossessed in your own third after a bad first touch).

In the original implementation, the authors use the XGBoost algorithm on a complex feature set to give the probability predictions. However, using the better predictive power of XGBoost also means losing a lot of interpretability. This is kind of a big deal because explaining the model findings and implications to analysts and coaches is imperative. Fortunately enough, the authors have also released a simpler version of VAEP which is trained on only 10 features. It is much more explainable, while being almost as good as the complex XGBoost model. This is the model we’ll work out in this post.

I’m assuming you’re slightly familiar with the original VAEP paper (check the Links section above). We’ll be using Python for this post. The libraries you’ll need are:

We’ll need the socceraction library to convert the Statsbomb data to SPADL format. We’ll also need interpretML to fit the GA2M (basically a GAM but with two interactions allowed).

Here’s what the paper says re data used. 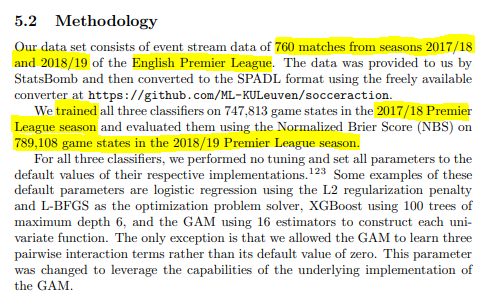 They trained the model on one season of the Premier League and evaluated it on the next season.

[Note: This method uses two different data providers so although we’re converting both to SPADL, there’s bound to be some issues regarding the standardisation of the datasets. However, due to a lack of alternatives, this is a limitation I have to accept.]

We’ve got two different event datasets to use for our training and validation sets.

Firstly, clone the socceraction public-notebooks repository. The notebook you want is the first one - “1-load-and-convert-statsbomb-data.ipynb” (you could also download just this notebook). I put the notebook inside the same directory where I was working (which looks like this).

The next step is to run the notebook. That’s as easy as opening the notebook and running all the cells. If everything works well, you’ll have a new folder called data-fifa in the vaep_gam directory. It contains the data from the 64 World Cup matches converted into SPADL format.

The next step is to create training features and labels out of our SPADL data.

This gives us our validation dataset.

And this gives us our training dataset.

The GAM described in the paper takes only 10 input features to predict the VAEP values and those are: 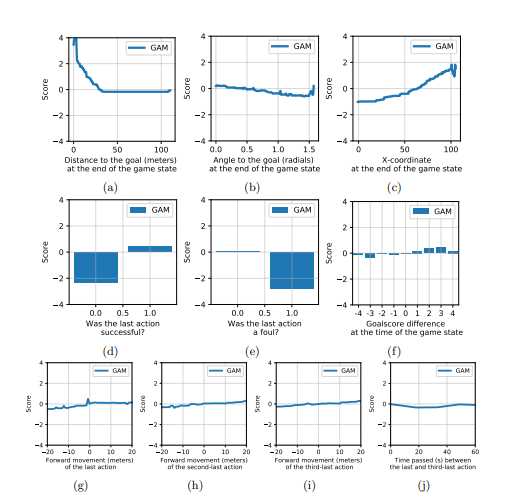 The above function calculates the angle between any point and the centre of the goalmouth (at point (105, 34)). In the next function, we will create the rest of the features.

Slightly long, eh? But if everything works correctly, you should get your Xs and ys when you pass in the train_df and valid_df.

Now that we have our data ready, we’re ready to get into the modelling part. There are a few good packages for fitting GAMs in python like PyGAM or Prophet, but the paper uses Microsoft’s InteractML so we’ll stick with that.

So what is a GAM? From the paper itself, “Generalized additive models (GAMs) are statistical models that model the target variable as a sum of univariate functions. Standard GAMs have the form”

“where $g$ is the logit link function and the functions $f_i$ are learned from the training data. This model is interpretable in the sense that users can visualize the relationship between the univariate terms of the GAM and the dependent variable through a plot $f_i(x_i)$ vs. $x_i$.”

[For more details, the Wikipedia page here is a great place to start.]

We trained two models, one for scoring, and one for conceding. We save the trained model instances in our models dictionary. To calculate our VAEP value for any given event, we essentially need to subtract the probability of conceding from the probability of scoring. This is what we do in the next code section.

Let’s plot the histogram of our VAEP values. 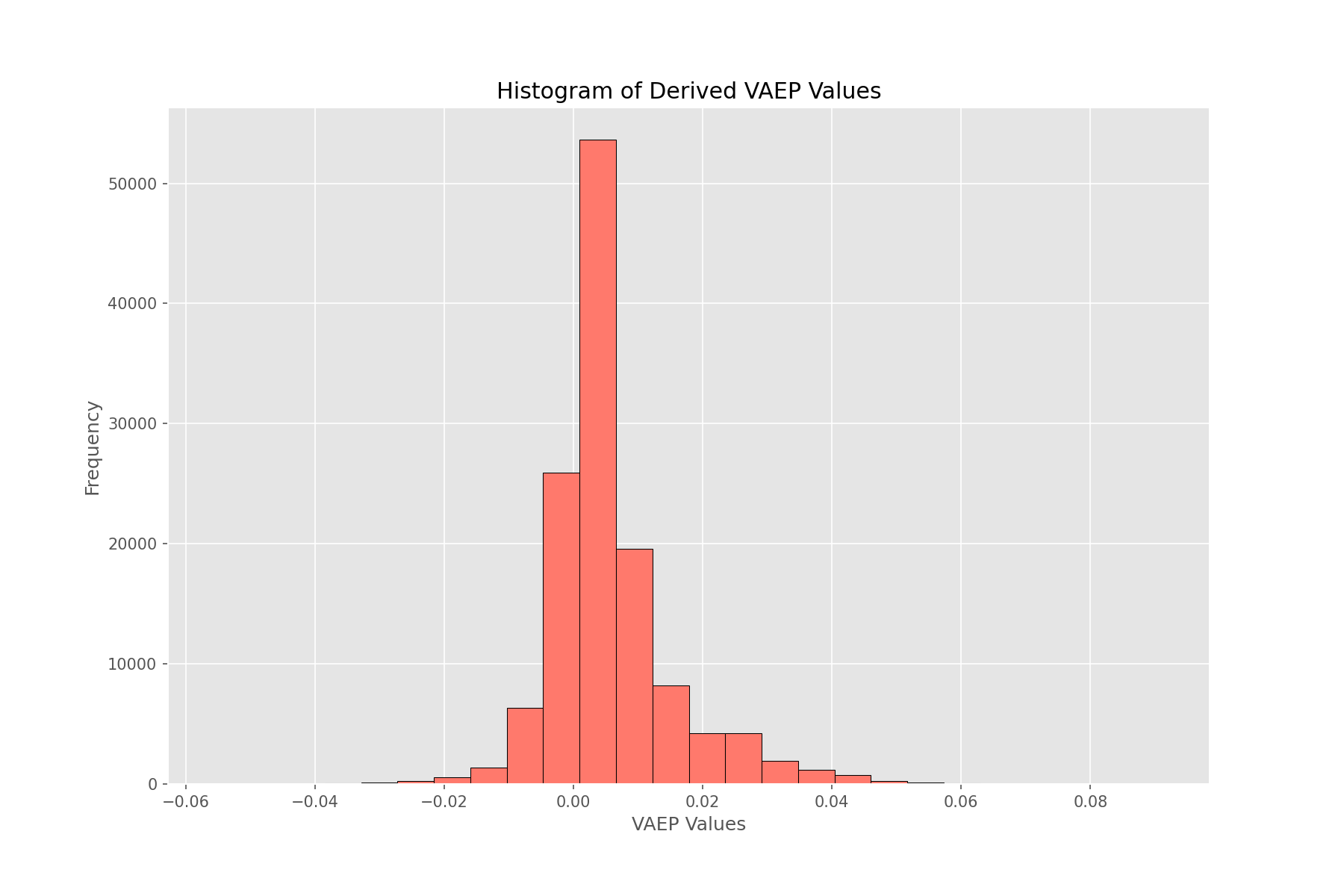 The numbers look normally distributed with mean slightly more than 0. This makes sense as the majority of events which occur in a match don’t directly affect the scoreline to a huge extent (or, not at all).

One of the advantages of using EBM is that with one just line of code, we can get our partial dependency plots to visually explore our univariate and interaction functions and their relationship with the input features.

If you’re in a jupyter notebook, this gives you an interactive dashboard to explore all the features. For example, here’s what the plot for the feature end_x looks like for our conceding model:

What the plot is showing is that as the end_x value of an action gets closer to 0 (i.e., closer to our own goal), the chances of conceding increases dramatically.

All that is good but at some point we need to address the elephant in the room: Is our model any good? If it is, how do we even know?

We’ll answer the second question first and that will indirectly answer our first question. “How do we evaluate the model?”

Since our classification task is highly imbalanced, we can forget about using accuracy. Going back to the paper, the original authors used Brier score to evaluate the model performance. Section 4.3 discusses in detail why AUROC might be a bad choice, when to opt for log loss vs. Brier score and the limitations with simple Brier Score. In the end, they used a customized version of Brier score which they’re calling Normalized Brier score. From the paper: 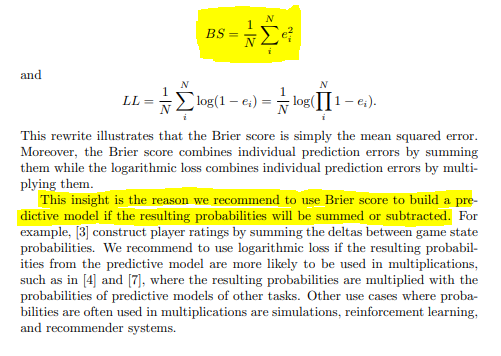 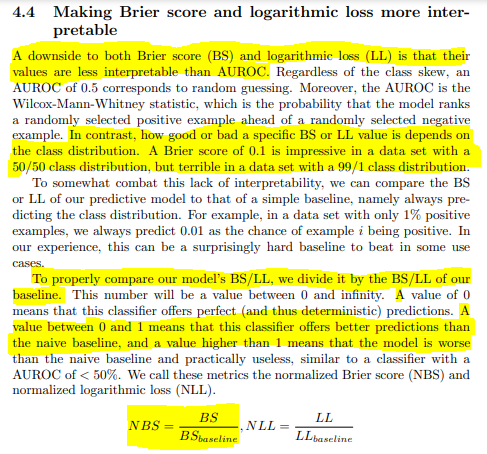 The things to take away are these:

Let’s write code for all that:

Yay, our model isn’t complete rubbish! Should we be happy? Probably not. The baselines from the paper are these:

We only care about the Top 10 Features model. As you can see, even their logistic regression model does better than our GAM (which has a 0.99 score). So to answer our first question, no, our model isn’t very good. There might be a number of reasons behind this. I’m assuming the two biggest factors behind our disappointing performance are: 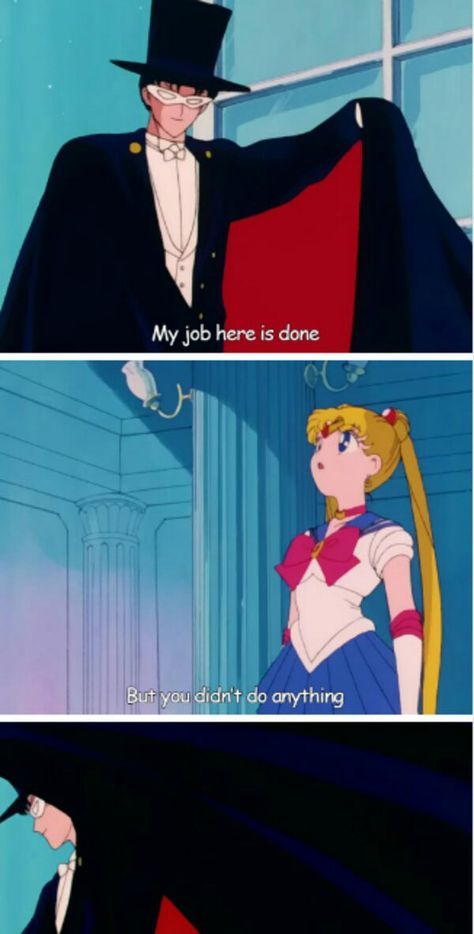 I was debating throwing out all the work given how bad our model seems to be doing but ultimately, decided against it. I hope there’s some value to be gained from this implementation. Obviously, if you have any ideas or have worked out some code (even better!) to decrease the normalized brier score, please DM me.

All the code to reproduce the models is here. Huge thanks to Tom Decross, one of the authors of the VAEP papers for very patiently answering all my noobish questions. Feel free to reach out to me for any feedback/questions/criticism!